Mount Shasta is the second highest mountain in the Cascade Range. The Karuk tribe, the indigenous people of Northern California call it Úytaahkoo or “White Mountain.” In April 2014, my plan was to climb White Mountain, not by means of the standard route (Avalanche Gulch) but by a long, sharp spine called the Casaval Ridge. With over 7,000 feet of elevation gain, and a mix of snow and rock, the snow pack must be perfect for this route to be climbed. When I arrived to my hotel night before the climb, the conditions were perfect.

Early the next morning, I picked up a local guide and we made the 30-minute drive from the town of  Mt. Shasta, California, to the trailhead. The guide told me he had climbed the mountain more times than he could count and knew it like the back of his hand. But even with so much experience on Shasta, he had never before summited the mountain via the Casaval Ridge. He had made 10 attempts on this route in the past, but always had to turn around because of the conditions on the ridge not being right — either bad weather or an insufficient climbing partner. 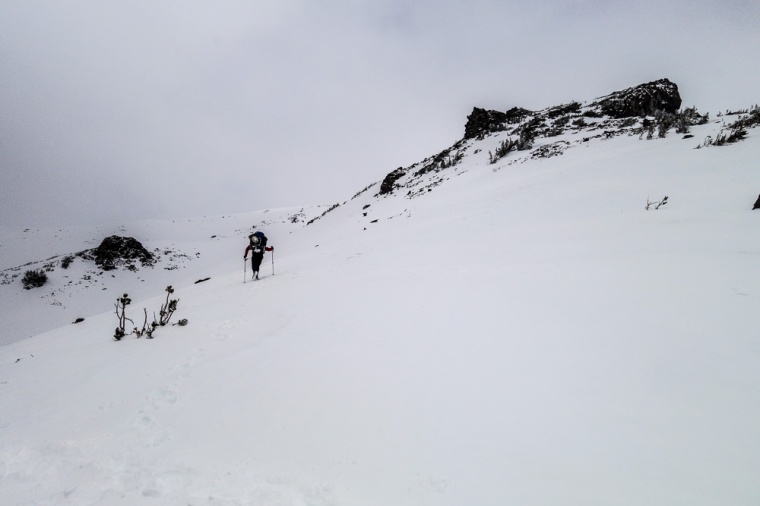 We hiked in a bit above the tree line, then set up camp on a flat spot near the crest of a huge white slope that tops out at the Casaval Ridge proper. Once camp was set up, we ate dinner and talked about the plans for the long technical climb the next day to the summit. We were both feeling great and the mountain was looking good. On the trek into camp, the sky was overcast and it had snowed off and on. But by dinner the sky was starting to clear.

At 1 a.m., we crawled out of our tent to clear, calm skies with a temperature of about 5 degrees Fahrenheit. In the light of the moon, I forced down a big bowl of oatmeal, some fruit, a candy bar and a liter of water. We then melted more snow to refill all of our water bottles as we geared up for our summit attempt. We climbed with the glow of our headlamps above camp, where we gained the ridge. By the time we got to any technical climbing, the sun started to poke above the horizon. Looking off the ridge to the Southeast in the photo below, you could see a rope team of six climbers below us coming up the standard route (Avalanche Gulch). 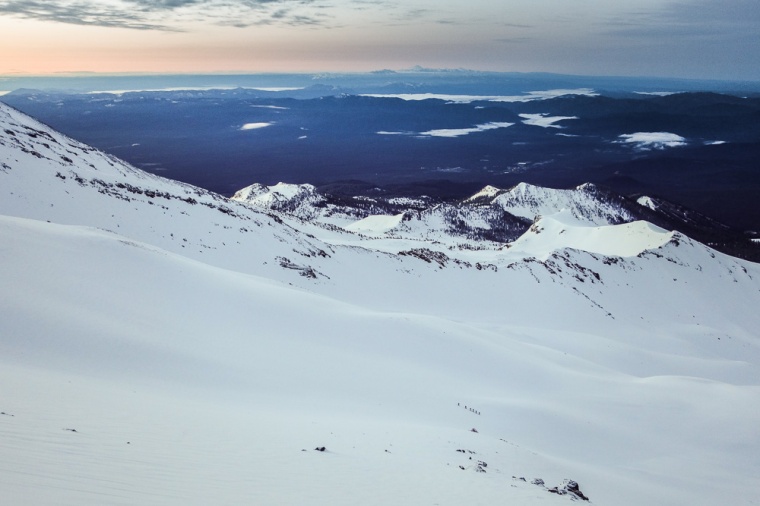 As you get higher on the ridge, it gets steeper and more technical. We stayed tied together as a rope team almost all day because the terrain stayed steep and rugged. We spent the morning hours traversing giant rock pillars that shot out of the ridge like fingers pointing to the sky. If the conditions aren’t just right in this area, a climber could get stuck facing a shear cliff of rotten volcanic rock. On this day, the snow-to-rock-ratio was just right, and the nice consolidation of snow made avalanche danger very low.

The Casaval Ridge lived up to its reputation as being one of the longest and most demanding routes on Mount Shasta. That being said, this route isn’t climbed very often. The average time it takes to climb the ridge from camp to the summit and back can vary by multiple hours, depending on the conditions and how long it takes to find good routes to navigate the ridge. 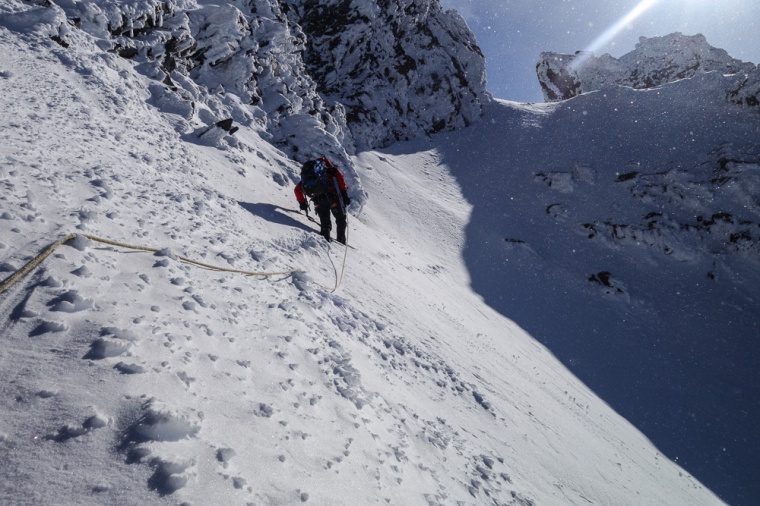 The air got thinner with every kick of my crampons into the crispy snow pack. At times, I focused so hard on making sure my ice axe made good purchase in the snow, and that each foot was planted as solid as possible with every step, that I forgot to look up at the incredible landscape that stretched out for hundreds of miles. This feeling of exposure really puts you in your place, reminding me how small we all are and how powerful a big mountain can feel. This feeling is one of the many things that draw me to the mountains. 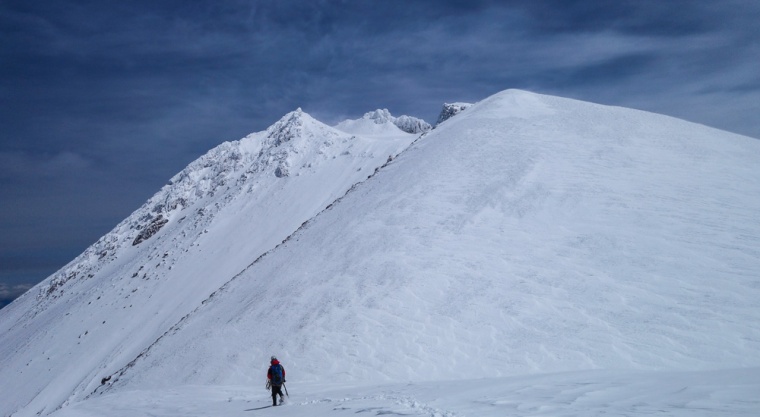 On the later end of our estimated time frame, we made it to the top of the ridge. From here you climb what is known as Misery Hill. Exhausted but stoked that the hardest part was over, we shot right up Misery Hill to the summit plateau. This was only the summit plateau, not the true summit. The true summit was the top of an 800-foot rock band on the other end of the plateau. As we made our way to the summit, clouds blew in and it started to lightly snow. We were getting tired, and our pace had slowed a little on that final 800-foot pitch to the summit. But we made it. We had summited Mount Shasta via the Casaval Ridge. By the time I stood on the summit I was in a complete white-out.

My guide and I decided that because of the low visibility, we would descend a less technical route.  As we descended, the visibility got worse high on the mountain, but seemed better below. When we got to the place where we could traverse the ridge and start looking for camp, it was after 4 p.m. We had only two hours or so of daylight left. At this point, we were exhausted and had been climbing for over 14 hours. Nether one of us were willing to risk getting lost while looking for a camp in a whiteout in the dark. After a few minutes of deliberating, we decided to head down and get off the mountain and hike back up on the next clear day to retrieve our camp. In under two hours, we got back to our car before having to bust out headlamps. That’s how I bailed out on Mount Shasta just hours after standing on the summit. 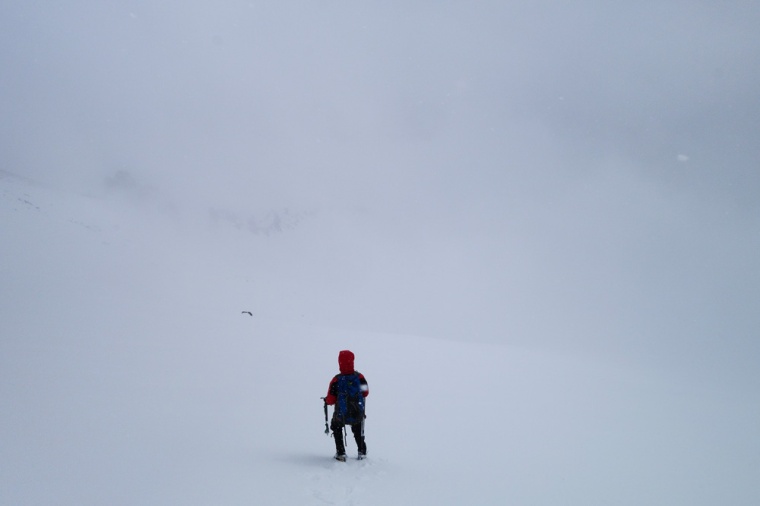